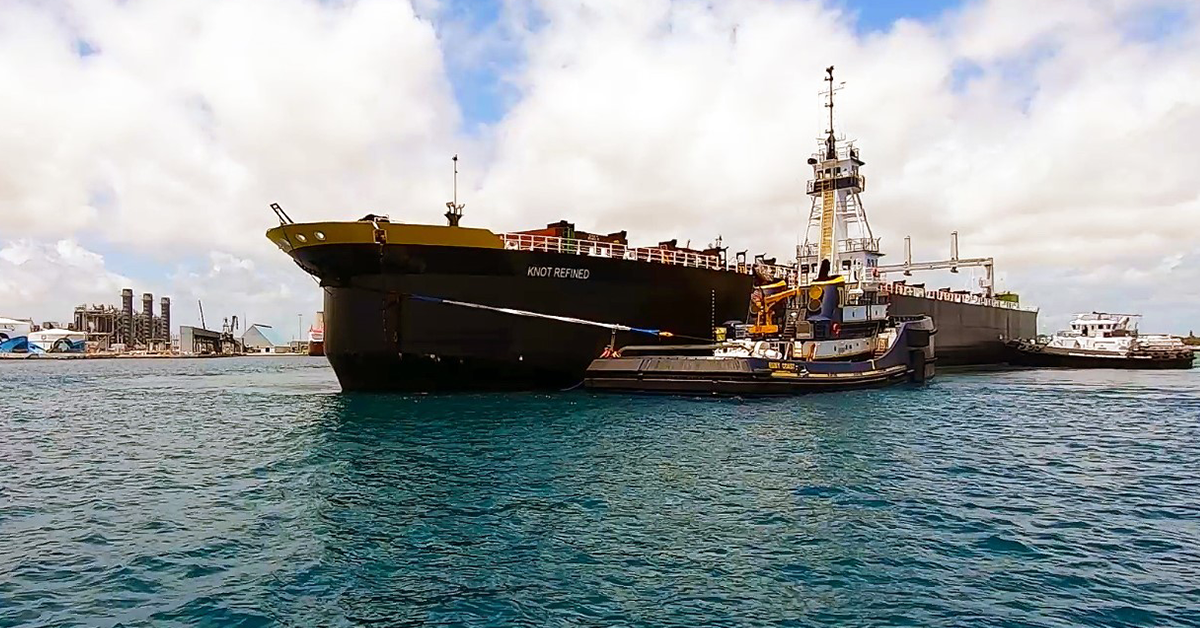 American Sugar Refining’s newly constructed barge has an 18,000-ton capacity, is larger than previously used barges, and is equipped with best-in-class capabilities, and is more sustainable than any vessel previously used.

When a food shipper has a significant volume of business that has a direct impact on its supply chain, sometimes a significant investment in logistics assets just makes sense. A member of Food Shippers of America (FSA) recently took this realization to a new level.

The 450-foot-long Knot Refined took more than two years to construct and is the first ocean-going, dry cargo barge of its size built in the United States since the early 2000s. The investment in the barge, which will make approximately 18 round trips per year from the Port of Palm Beach to transport raw sugar primarily to ASR Group’s cane sugar refineries in Yonkers, New York and Baltimore, Maryland, will further vertically integrate the operations of ASR Group and its parent companies.

“We have relied on third-party barges to transport our raw sugar coastwise since the 1970s,” says Chuck Ferrer, ASR Group’s Sr. Director of Ocean Freight Logistics. “At that time, sugar from Florida Crystals and Sugar Cane Growers Cooperative was sold primarily to trade houses. When the two companies acquired the Yonkers refinery in 1998 then additional refineries in Baltimore and outside New Orleans in 2001, we became fully vertically integrated, but we didn’t control our own domestic freight. We’re excited that now the Knot Refined changes that.”

With an 18,000-ton capacity, not only will the Knot Refined be larger than the barges previously used, but it is also equipped with best-in-class capabilities and is more sustainable than any vessel used in the past.

Florida Crystals and Sugar Cane Growers Cooperative sustainably grow and mill sugarcane in western Palm Beach County and produce high-quality raw sugar. Approximately 650,000 short tons of that sugar is shipped annually from the Port of Palm Beach to ASR Group’s refineries through port facilities operated by Florida Sugar & Molasses Exchange, Inc. (FSME). Trucks transport the raw sugar from the Belle Glade and Pahokee mills to FSME’s sugar terminal at the Port, where it is discharged into a 21,000-ton capacity warehouse. Roughly once per week, sugar is loaded onto a barge in a continuous operation at a rate of 700 tons per hour.

To commemorate the construction of the first barge, ASR Group, Florida Crystals and Sugar Cane Growers Cooperative invited employees to participate in a naming contest. Following hundreds of submissions, employees voted on the winning name, which adds a creative, nautical twist on the cargo being transported by the Knot Refined: raw, not refined, sugar. The name also highlights the companies’ vertical relationship by focusing on the midway point of the sugar’s journey between Florida Crystals’ and Sugar Cane Growers Cooperative’s sustainable farms to ASR Group’s refineries, which make the final products.